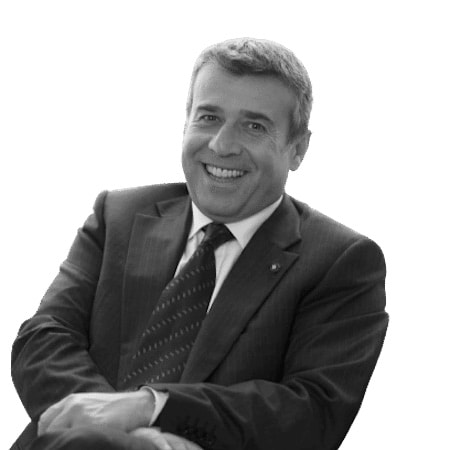 Born on 12 December 1964, married with three children, from an early age he distinguished himself in Christian-inspired associations, promoting various social and mutual solidarity activities in the housing, training, assistance sector and presiding over various cooperatives and business consortia in Brianza and in the Milanese area.
On these formative experiences of business operations in the social field, Guido Della Frera has progressively built an efficient and modern group, with companies and service companies starting from the creation of the Geriatric Rehabilitation Center, two RSAs in the Milanese conceived, built and developed with innovative management.
Guido Della Frera, today Chairman CEO and majority shareholder (81%) of GDF – Gruppo Della Frera S.p.A., a holding company controlling companies operating in the tourism, catering and real estate sectors.
In the tourism sector, the Group is intensifying its investments in tourism-hotels in Lombardy, developing the successes and experiences gained with GRAND HOTEL VILLA TORRETTA, just outside Milan, the historic flagship of corporate prestige, acquired in 2006. The imposing 17th century noble villa, rich in frescoes, art and culture, has been admirably restored and relaunched on an international standing of high hospitality: 78 rooms. location of excellence for meetings and conferences, with a modern 300-seat auditorium and multiple meeting rooms equipped with the best technologies. The renowned IL VICO DELLA TORRETTA restaurant, open to the city, completes a project of great charm, for an accurate and prestigious welcome.
In 2015 the Group inaugurated the HILTON GARDEN INN MILAN NORTH in Milan, a modern and efficient 4-star hotel of international quality and Italian sensitivity. The 193 rooms and a modern 800-seat business center are designed to meet both the needs of families and the needs of meeting and business tourism, on the new Milan brand, after the success of Expo.
IBIS MILANO FIERA, created by the Group in Lainate, next to the Exhibition Center and the EXPO area undergoing innovative transformation, provides 120 with high levels of quality and respect for the environment.
The consistent positioning in the tourism sector expands with the opening in Brescia in 2016 of NOVOTEL BRESCIA 2, a business oriented 4-star hotel with 120 high-tech rooms, meeting rooms for 150 seats, swimming pool and fitness center, a brilliant “gourmet bar” open to the glamor of the city’s encounters and to his own
rediscovered economic dynamism.

In 2020 the DOUBLE TREE by Hilton Hotel was inaugurated in Brescia, a 4-star hotel with 137 rooms, including 9 spacious suites and a renowned restaurant, The FortyFive 45, with a modern and captivating concept The Hotel also equipped with modern conference spaces for a total of 200 square meters, a fully equipped fitness center open 24/7 and an outdoor swimming pool surrounded by a welcoming garden.
The investments that the group made in the Brescia area also involved the opening of HOTEL CRISTALLO, a comfortable “boutique hotel” in Ponte di Legno.
The Della Frera group is also active in the catering sector, as well as with the management of some restaurants and bar master franchisees of the Burger King Group with the management of two points of sale in Castelletto Ticino (NO) and in Medolago (BG). Two other openings are also planned within the year.
In the real estate sector, the Della Frera Group has built in recent years the PII in Lainate where the proprietary IBIS hotel was built and has developed commercial settlements for LIDL and Mc Donald’s and other commercial brands. a tower for tertiary use with an area of ​​over 4,000 square meters is planned for the next few years.
The PII of Milan Affori is currently under construction, which involves the construction of over 300 residential apartments and the construction of the Hampton By Hilton hotel.
Since 2013 he has been collaborating with Energheia Impresa Sociale srl, a body accredited by the Lombardy Region for both training and active employment policies, to build concrete training and job placement opportunities especially for young people.
Since 2015 Guido Della Frera has been active in the education sector, with the establishment of the company Atena Impresa sociale, of which he is President for the management of the Liceo Classico and the Dehon Technical Institute based in Monza.
Since 2008 he has been awarded the honor of Knight of the Republic.
In March 2018 he was elected to the Italian Parliament in the Chamber of Deputies.