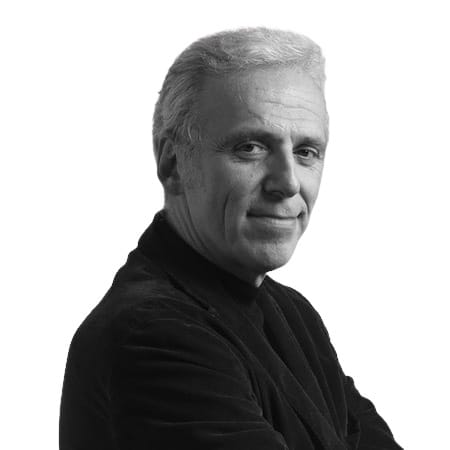 Considered one of the most prominent Italian architects and designers on the international design scene, MASSIMO IOSA GHINI (Bologna, 1959) participated in the Eighties in the innovative activities of the design avant- garde, founding the cultural movement of Bolidismo and participating in the Memphis group of Ettore Sottsass.

His major works of interior design and architecture include the worldwide development of the Ferrari Store and Kiko Store chains, the headquarters of Capital Group in Moscow, Casa Museo Giorgio Morandi in Bologna, the Kröpcke Metro Station in Hanover, the collaboration with the Cremonini Group Chef Express for motorway and airport areas, the recent electric monorail Marconi Express in Bologna, IBM Rome Software Lab in Rome and the Brickell Flatiron residential building in Miami, and various projects under construction.

He has taught at the University La Sapienza of Rome; since 2008 he has been Adjunct Professor at the Polytechnic of Hong Kong; and at the Department of Architecture, University of Ferrara.

Many of the products designed by him are in various museum collections and have received awards and commendations, among which International Architectural Award by Chicago Athenaeum, Good Design Award, Roscoe Award, IAI Green Design Award, iF Product Design Award and Red Dot Award.

In 2013 Triennale di Milano dedicated a solo – exhibition to his work “From the beginnings to the sustainable present”.
In 2015, the retail concept Kiko Milano, won the Best Retail Global Expansion award at MAPIC 2014.